While the class was originally only to have a maximum of 12 participants, it ballooned, by popular demand, to 18 just minutes before it was scheduled to begin at 5pm. The class consisted of people from as far away as Dallas, Texas and Kansas City, Kansas. All were in town for the annual Green Box Arts Festival, a 9 day celebration providing artists and visitors with an opportunity to nurture the creative process and explore new artistic directions in the natural beauty of Green Mountain Falls.
.

The scheduled 2 hour class began with a quick glass of J Vineyards & Winery Brut 2002 paired with a water cracker with goat cheese and topped with a green grape and slice of ripe strawberry. The participants then had to explain what they tasted in the sparkling wine and why the food added to the experience.

The class learned that there are really only 5 different tastes, Sour, Bitter, Salty, and Sweet, and that smell equates to 85% of the taste of wine. From there we worked on the 2 main categories of wine’s olfactory sensations, Fruits and Oak and how to differentiate them.

The main theme of the class, which we called Sommelier 101, was to assist each of the participants to enjoy simply drinking wine, and not being afraid to try different food and wine combinations.

As an example, we tasted 2 very similar Chardonnays, both 2012 vintages, both from Williams Selyem, but one was Unoaked and the other Oaked. The class really started to understand taste and smell then, and it seemed to open their minds for the rest of the afternoon.

The next tasting was a Twomey Cellars 2011 Russian River Pinot Noir. First thing the class noticed with the different glass which was used for serving. Many had noticed the big bowl glasses before, but never understood the why and what for of it. Well, they quickly learned and understood.

The final tasting was a 2008 Cabernet Sauvignon from Trefethen. Once again the class received, another glass style, which they had a lot easier time swirling and less was tossed over the rim.

Here they learned about “Legs,” and how to estimate alcohol content and the age of the wine they were drinking. We also discussed how Tannins affected the mouth, and how some disappeared quickly while others lingered.

Other topics discussed during Sommelier 101 were serving temperatures for different wines, storage techniques, what are good summer patio wines and what are good winter fireplace wines. 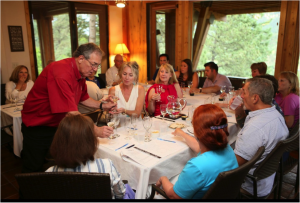 Finally, 90 minutes later, everyone grabbed a new glass and the pairings began, so they could get an idea of how easy it is to match foods and wines together for parties or dinners they were planning.

There was a baked cream cheese with salt, pepper and dill wrapped in a light pastry for the Unoaked Williams Selyem Chardonnay, and handfuls of toasted almonds for the Oaked Chardonnay.

For the Twomey Pinot Noir they found a meat, cheese and fruit tray matched perfectly and made the wine taste even better.

Finally for the Trefethen Cabernet Sauvignon, there were meatballs with a wonderful spicy marinara sauce which apparently was the hit of the evening.

For the next hour the class filtered around the kitchen, living room, and outdoor deck talking wine, food, and what they had learned amongst themselves. It was truly a wonderful sight and sound for me as their teacher. As I said earlier, the object was for them to feel more comfortable and understand wine and food.

As a follow up, most asked if we would teach an advanced class, maybe a Sommelier 201 next year, and if so, count on them to be there.