Michael Jordan needs no introduction. His name — synonymous with excellence; a descriptor all its own —speaks for itself. His resume does too. There are countless stories devoted to his success. When you’ve had a career like Jordan has — one that only a few can match — it can get old
at all the time,” he said. “Others tell me that but it’s hard for me. I’m a server. Yeah, I have those two diplomas and really truly that’s like an Olympic gold medal. Yeah, but that and two bucks and I still can’t get a good cup of coffee.”
He definitely doesn’t play. He’s only 5-foot-4. This Jordan has never met that Jordan. They have a mutual friend but that meeting hasn’t been arranged, though he thinks it would be fun. He does have a photo and a jersey signed by him. Jordan is a basketball fan, but he doesn’t have a favorite team. He likes the sport more than just one club, though he could be called a Lakers fan if he was cornered because he was born in Los Angeles and grew up there and in Hawaii.
“I can’t play it unless I stand on your shoulders,” he says. “I’m a little short guy. I love to watch it. It was really fun being Michael Jordan and walking up to a restaurant that had kids and saying ‘I’m Michael Jordan.’ That’s weird huh?”
Jordan, though, has had a pretty spectacular life of his own. He’ll be the first to tell you how much he loves it. How lucky he is.
Jordan grew up in Los Angeles, working and hanging around the restaurant his father, Matty, built into an old Hollywood staple — Matteo’s. Matty Jordan was from Hoboken, N.J., where his family knew the Sinatras. He became best friends with Frank Sinatra, who would hang out at Matteo’s several nights a week, turning it into a celebrity pad. Matty Jordan, his son says, would cook for John F. Kennedy when he came into the city and land small roles in Sinatra’s movies.
Michael grew up in the restaurant. He sat on Judy Garland’s lap on her birthday because she shared it with his mom. Ava Gardner taught him Italian. Dino Danelli gave him drum lessons. When his dad opened a Matteo’s in Waikiki, he moved to Hawaii for his adolescent years. He started working at Matteo’s at 11, worked his way up in the kitchen and eventually moved to the front of the restaurant. Jordan found he had a zest for flavors and cooking and food, so he continued on in the restaurant business. He became enamored with wine while managing the Pavilion in Newport Beach, with its extensive wine list, and then helped open Napa Rose, at Disneyland, in 2001. Napa Rose became a hit, with more than 1,000 wines and a reputation among oenophiles.
“Wine is one of the few things in the world that it gets better when you share it with someone else,” Jordan said. In 2001, he started preparing Napa Rose employees for the Court of Master Sommeliers introduction-level exam, with
waiters and busboys passing the test for the first level of sommelier. 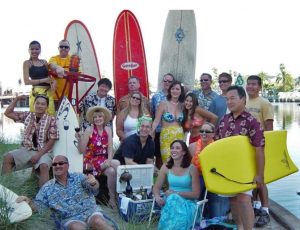 Two years later, he earned a certified wine educator diploma from the Society of Wine Educators — with its 85 multiple- choice questions, essay, and tasting/matching section. Jordan didn’t become a Master Sommelier until 2007, one of just 86 in the world at the time. It took him seven years of arduous study and eight boxes of flash cards to pass, and only after he sat for the exam four times. This put him in rarefied air. Just 15 people have diplomas from both. As the spotlight on sommeliers has grown, with documentaries and cooking shows and a nation refining its palate and romanticizing wine, Jordan’s job has only gotten better. He left Napa Rose in 2009, joined Jackson Family Wines in 2013, and spends his time now talking about wine, and traveling to help restaurants and hotels build their wine lists. He gets joy from teaching, educating people about wines or preparing some for their master exams and setting up blind tastings. The relationships, through wine, are the payoffs. “We’re servers,” he said. “We’re not rock stars. We don’t even make the wine. We’re just servers…It’s the hospitality industry. It’s the guest. The guest is the most important person, not the sommelier.” But there are some perks to being Michael Jordan. He’s close friends with former L.A. Ram Vince Ferragamo and he considers Tommy Lasorda an uncle. When he threw Lasorda an 80th birthday party at Disneyland he commissioned a 28-liter bottle of David Arthur Elevation 1147 and gave everyone in the restaurant a glass 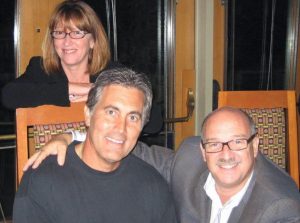 Kobe Bryant used to come by Napa Rose and Jordan would give him a table and some space. But when he and the U.S. Olympic basketball team were both at a Macau hotel in 2008, Jordan and a friend ran into Bryant at a restaurant and the
former Lakers star recognized and called out for him. “MJ, is that you?” Bryant said. Jordan’s friend was floored. Jordan has heard the jokes, too. “Where’s your ring?” people would ask him, and for a month or so around 2002, he had an easy reply. It was on his hand. He had befriended Bill Schmidt, the longtime Gatorade executive who signed the basketball-playing Jordan to a deal with the company. They grilled T-bone steaks and Jordan was his go-to for wine advice. Schmidt and Jordan, the NBA star, also became close friends. Close enough that Jordan, who, Schmidt says, didn’t like the championship rings the Bulls created, made his own and gave Schmidt ones for titles three and four. Schmidt never told that Jordan about the other. But he did wear the ring gifted to him after championship No. 3 to Napa Rose. He let Jordan wear it and ultimately hang onto it for a while. Jordan wore it long enough to have it on his right ring finger when posed for photos for a spread in Orange Coast magazine. “That thing was so big,” he said. “It stretched my arm out.” When Schmidt came back to the restaurant again, he asked for the ring back, but wearing the one for title No. 4, he let Jordan wear that one instead. “It was Michael Jordan,” Schmidt said. “Jordan’s name on the ring. MVP. You’re an MVP to me — wear it. What’s he going to do? Lose it?” And, he added: “It’s got your name on it.”
Jordan treasures the name, but it wasn’t always in the family. They came to the United States as Giordano and his father changed the name. Jordan isn’t entirely sure why. He’s heard a few versions. In one, his father and a friend wanted to open a sandwich shop in Hoboken but couldn’t because they were Italian. So
Matty Giordano became Matty Jordan so he could get a lease. He also heard his father was a big gambler — he was nicknamed Matty Action — and he changed the name somewhere between Las Vegas and Los Angeles.
He’s had people come up to him and offer to help change the name back. Jordan refuses.
“Are you kidding me?” he said. “I’m having way too much fun being Michael Jordan.”

Story from The Athletic www.theathletic.com

(Top photo: Jordan had two custom wine-stained guitars made and gave one to his friend Johnny – photo Courtesy of
Michael Jordan)