My wife Barbara and I are in Tuscany winding up a truly amazing visit to two of Italy’s most dramatic and treasured winemaking areas.

Two years ago, we led a group of wine- and food-loving friends on a tour of Paris followed by a barge trip through the Canal de Bourgogne in Burgundy. We thoroughly enjoyed exploring many of the wines of France with the emphasis on Champagne and Burgundy.

Our fellow travelers loved the experience and asked if we could plan a repeat adventure to Italy for the fall of 2016. We enthusiastically agreed, the planning began and here we are.

Italy is perhaps the most complex winemaking country in the world with more officially designated areas, varietals and age-old traditions than any other. It would take many weeks, or even months, to explore each of the areas in detail so I am focusing on two: Veneto in the northeast and Tuscany just to its south. Our goal was to focus on not only the local wines and cuisine, but also the regions’ culture and history through personal encounters.

And in an effort to expose our friends to the wide range of wines produced throughout Italy (beyond Veneto and Tuscany), I arranged for a series of lunches and dinners each with a focus on several other wine-making areas. Our culinary quest took us to the many wines from the far northeast of Friuli Venezia-Giulia, Alto Adige and Trentino, through great wines of Piedmont to the northwest and toward the extreme south to Puligia and Sicily with everything in between.

In all, we sampled and enjoyed about 80 wines with a strong presence of Italy’s splendid whites (too often overlooked by many consumers) through many private tastings and wine-oriented meals. Many of the wines are available in the U.S., and most of our guests were determined to search them out when returning home.

We began our Veneto journey with local friends Sharla Ault and Marina and Maurizio Bergozza, who offered an insider’s view to the historic towns of Bassano del Grappa and Marostica. Our day was also highlighted by a grappa tasting at Nardini, a family owned producer since 1779, and a locally inspired lunch at Vignaioli Contra Soarda in the hills surrounding Bassano. 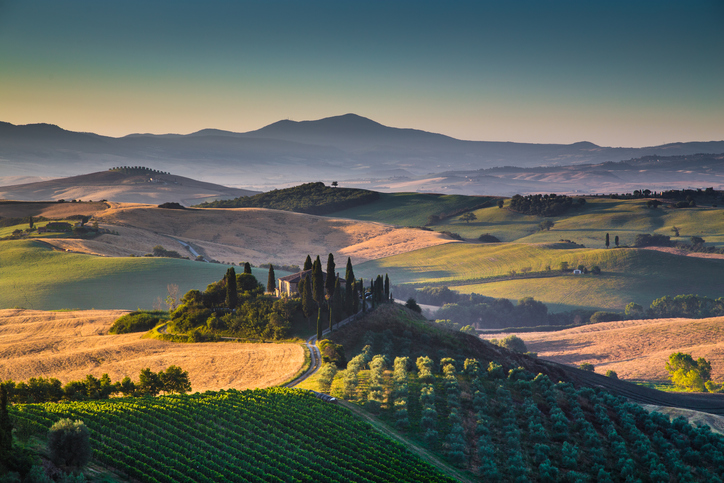 The next day, we visited Filippi in Soave Classico and Allegrini in Valpolicella Both are considered among the finest of their respective regions, and through our visits we all learned much about these areas and the traditions of both producers. We were fortunate to have noted wine writer Gianpaolo Giacobbo accompany us during this “Diamonds in the Rough” day.

Soave Classico is just now beginning to overcome the negative impression of being linked to the mass-produced commercial wines of the valley floor. But as the steep hillsides rise sharply above the valley, the quality of the fruit and resultant wines increases dramatically. We were hosted at Filippi by owner/winemaker and third-generation grower Filippo Filippi whose home, winery and vineyards share this magnificent property.

Filippi is located at the highest point atop the hill of Soave where we were escorted on a “hike” through the vineyards to observe the soil types and vineyard blocks as they changed from clay and chalk to gravel and volcanic rocks. An extensive tasting then continued our education. Each vineyard block is farmed, harvested and vinified separately with specific bottlings of the traditional garganega (three distinct blocks), trebbiano (the highest block) and chardonnay (very Chablis-like).

Allegrini, one of the most respected vintners of Valpolicella, is housed in their historic 16th-century Villa della Torre estate and vineyards. They are a more modern-day producer of Valpolicella Superiore Riserva, Recioto (a traditional sweet red), Palazzo della Torre (similar to a Ripasso) and spectacular Amarone. All are world-class wines made in a more modern style.

Amarone is a traditional wine of the area that is seen as not only one of the great wines of Italy but also of the world. The grapes are harvested and left on bamboo racks (appassimento) to dry for about five months before fermentation begins in the winter after harvest. Allegrini has pioneered a newer drying regimen by using small flat plastic bins to dry the clusters that has now been adopted as well by others in the area.

After visiting Filippi and before reaching Allegrini, we traveled to the ancient town of Valpolicella to enjoy a traditional multi-course lunch paired with Franciacorta, several other whites of the northeast and a very rare red schiave from Alto Adige (mostly known for its whites) expressing a similar flavor profile to grenache. And for dinner, we dined in the old town of Verona for a culinary adventure paired primarily with the reds of the northwest and Piedmont.

We left Veneto and headed south to Tuscany with fond memories and a vast store of knowledge gained by meeting the people and learning the history of this very under-appreciated area. More on our Tuscan adventure and an amazing surprise we all shared in a couple of weeks. Ciao!