The Blue Star Restaurant in Colorado Springs, Colorado known for fine dining, great chefs, wines and a fantastic bar, wanted to help increase business on one of their slowest nights of the week.  So the brain trusts came up with the idea of scheduling 10 Wednesday evening Passport Wine Dinners, one per month for the next 10 months.  The first dinner on March 19th was Spain.

Twenty people attended this inaugural event which surely is going to grow.  Each was given a small passport and once the evening was over a special stamp was affixed to the “Spain” page.  If the participants attend 7 of the 10 events, they will be invited to a special “Best of Napa” wine dinner event at no charge. 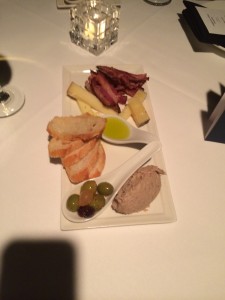 COURSE ONE  set the tone for the evening with “Cristalino Brut Cava, Penedes” along with Surryano, Chorizo, Olives, Manchego, Idiazabal, Olive Oil, and Bread.  In addition there were strips of Lamb Bacon and a healthy serving of Lamb Pate which was the perfect accent.

The Cristalino Brut Cava was very light and clear, with a wonderful bouquet of freshly picked green leaves and the slight flavor of apples.   The pairing worked well and the plates were quickly emptied.

As for me, I had never tasted Lamb Bacon before, and I’m now a true believer on exactly how good it is.  I’ll be looking for more in the future. 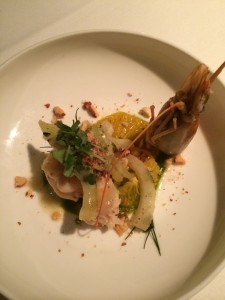 Knowing that Albarino is one of the most popular wines in all of Spain, I was truly looking forward to this tasting, having never sampled it before.  It was very light and fruity, with a touch of vanilla.  At first taste it reminded me of a good Chenin Blanc.  This would be wonderful on a bright spring afternoon while sitting on the patio enjoying some jazz being pumped from the JBL speakers.

The pairing was excellent and Chef Will spiced it up a bit, adding what he calls “The Blue Star twist.”  This time Charred Orange and Kiwi added an extra citrus bite that elevated the experience on the pallet and allowed it to work.

On a side note, since I lived on the East Texas / West Louisiana boarder for a while many years ago, it was only fitting that… yes… I did pick up the head of the shrimp and sucked it out.  Ah…. bringing back my youth, or what I now call it.  OH, just so you know, I was NOT the only head sucker at the table. 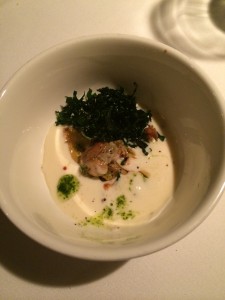 COURSE THREE, which consisted of “2011 Avanthia Godello” paired with Chilled Potato Soup, Smoked Oyster, Kale and Cilantro, was a WOW to say the least.

Normally, I am not a chilled soup fan, but this was a home run if there ever was.  With the addition of the crunchy Kale, the smoked oysters and cilantro, this pairing was fabulous.  The wine was light, bright and the ginger hit perfectly.  If the evening had ended with just the 3 courses I would have been more than satisfied; however, there was more.  Each of the next 3 proceeded to get even better marks, along with ohhs and ahhhs from the 20 of us present.

But in my mind, it was going to take something very special to top this. 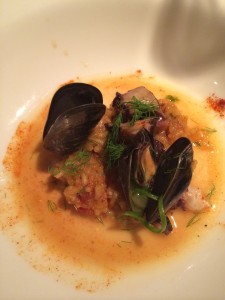 COURSE FOUR did exactly that.  It was an outstanding “2009 Muga Reserva, Rioja,” with a Grilled Octopus Paella.

The tannins, which I do personally enjoy, were very evenly distributed across the pallet.  The deep fruity flavors of the Tempranillo jumped out at you, along with the 14% alcohol content, which made its statement quickly.

The Paella was exceptional; in fact, several of the couples remarked that this was the best they had ever tasted.  The numerous chunks of the grilled octopus along with the muscles added to the visual experience and the flavor.  Yup, this was good.

This did indeed top the Chilled Potato Soup, and to me, was the best of the evening, although the course 5 was pretty spectacular.

COURSE 5 was a 2009 Salanques “Mas Doix Priorat,” with a large Lamb Shank, Merguez Spiked Cannellini, Catalan Spinach, and Olive Dust.  What a combination!

The Lamb was slow cooked for two plus days and had a crusted seasoning that was about as good as it can get.  How the heck was this meat so moist and the crust so crunchy, and as Andy of Mayberry would have said…. GOOOOOOOD?

While probably a bit too much food at this point in time, it didn’t last long on most plates, mine included.  My wife even commented, she had never seen me eat cooked spinach before in our 46 years of marriage.  Fact is, it was really good, and the partnering with the lamb and cannellini and the wine was … well… forgot I was eating spinach.

Unfortunately, I also forgot to take a picture of the presentation, as the aroma of the lamb simply took me away and deposited me in a different state of mind and enjoyment.

Once again, Chef Will did “The Blue Star” twist, this time using a Curried Apple Empanada with just a touch of cinnamon wrapped in a crunchy pastry.  The Empanada by itself proved to be the perfect ending of a wonderful night; however, when you add one of my all-time favorites, Vanilla Bean Ice Cream and Carmel, it just doesn’t get much better.

The evening started at 6:30 and ended at just before 10pm.  The smiles on the 20 of us proved we were all happy campers.  But why not, we were all full of great wine, even better food, and an evening to remember.  Another high point this Wednesday, it was only $75 per plate.

Now we’re waiting for April 23rd and our next Passport Wine Trip.  The next location ….. Portugal.  Who knew we could travel the world, tasting some of the best wines and foods available, and never leave home?   Thanks Blue Star, it was a fun night for sure.