Newport Harbor is known for majestic yachts that dock in the backyards of mansions, and the celebrities who might be seen onboard sipping champagne. Celebrities who owned yachts in Newport Harbor include Nicolas Cage, John Wayne, Humphrey Bogart, Buddy Epson, James Cagney, Shirley Temple, Errol Flynn, and Mae West. John Wayne’s yacht the 136 foot converted minesweeper, “Wild Goose,” still prowls the waters. Newport Harbor is the largest small craft harbor in the country with eight islands and homeport to over nine thousand boats.

Large commercial ships do not stop here, so there are only a handful of working tugboats in the harbor. Tugboats are known as the workhorse on the water, and these mighty boats can be seen muscling large ships in and out of ports or towing a string of barges. Yet there is a softer side to tugs as authors have brought tugboats alive in their children’s books, and images from Steamboat Willie continue to popup from time to time since being released by Disney in 1928.

However, locals and visitors alike will stop and watch as one local tug passes by with her black and white hull looking powerful and iconic of years past. Newport’s most popular tugboat is the William B that can be seen regularly docked at the Newport Harbor Yacht Club and where just offshore she resides on a club’s mooring can. Surprisingly, this tugboat is the most popular boat on display during the club’s annual opening day ceremonies as people climb over the stern to be welcomed by the tug’s owner, lifelong Newport Beach resident and Newport Harbor High Alumni Gary Hill.

A very interesting story as to how Gary acquired the tugboat when the boat sat idle while damaged on the Columbia River, Oregon, in 1988. “She was on a tow to Alaska and while coming down the Columbia River, she ran aground and the barge came up and smashed her stern. So, I went up to Portland, Oregon, with a well known shipwright named Wayne Ettel and bought her without a survey,” Gary describing his acquisition. “What a wreck she was, now looking back, and she leaked so bad coming down the Oregon coast we thought we might loose her. Then she just swelled up and stopped leaking.”

The William B is a traditional looking tug with a wooden hull that is planked with 2.65″ x 9″ Douglas Fir planks that are resting on 12″x12″ cedar frames. Additionally, there is an inner ceiling from 3 feet below the water line up to the rub rail, so if you want to install a thru hull fitting at water line then the hole has to be a minimum of 16 inches deep.

Living in Newport Heights, Gary is the owner of Hill’s Boat Service, which is an on-the-water fuel dock situated between the Balboa Pavilion and Balboa Angling Club in Balboa. His fuel dock holds 40,000 gallons of gas and diesel, and he has the only mobile fuel delivery via the waterways on the West Coast with the vessel Tanker 1, which is a smaller lightener that delivers diesel fuel to yachts around the harbor. The fuel dock does sell a few other items to the boaters such as block ice, beverages, chum, and snacks.

He met is wife, Sandi, of thirty-four years when he was filling her boat’s outboard engine with gasoline. Now, a family of five with their three kids, Casey 28, Morgan 25, and Carson 22, of which two sons can skipper the tug on their own. Additionally, Carson holds a one hundred ton USCG Master’s License with a tanker man endorsement.

“They have all enjoyed the tug from San Francisco to the Sea of Cortez,” Gary says. “We have done some nice surf trips from the backside of Santa Rosa to the Ranch at Point Conception to Scorpion Bay Baha and to the east end of Cabo San Lucas.”

Growing up Newport Bay, Gary skippered boats before he had his driver’s license, and he spent a lot of time on Shark Island now Linda Isle with a couple of other Newport locals Duffy Duffield of Duffy Boats and Mark Hillgren owner of the yacht Juno. Those were the days when water skiing in the Back Bay was allowed, and after school Gary would visit his Dad at the fuel dock from his childhood home in Bayshores aboard his ten foot boat with an old three horse Johnson outboard.

The 77 foot William B and her sister ship, Donald R, were originally built by Puget Sound Bridge & Dredge Company in Seattle for the United States Navy in 1943. Her wooden hull has a beam of 21 feet with a 10.5 foot draft, and weighing in at 160 tons. The Foss Tug Company acquired the tug in 1963 until 1974 when a couple of independent tug operators held title until her demise on the Columbia River.

Gary is maintaining the originality of the tugboat even while the boat is being used by his family as a recreational yacht traveling from San Francisco to the Sea of Cortez. The galley is very similar to day one with an original refrigerator and freezer that were built for Navy and the equipment still works great today. He did replace the diesel oven with a propane unit, but stepping into the galley takes one back in time.

However, the electronics onboard were not on the drawing boards yet when the tug’s keel was first laid. The bridge now includes Two VHF marine band radios, a Garmin Global Positioning System (GPS), a Foruno Radar, a Foruno fathometer, a Sperry autopilot, an Icom single-sideband, Signet weather, ACR Electronics EPIRB (Emergency Position Indicating Radio Beacon), a CD Player, and no and never will a TV be aboard.

The tug’s single screw makes handling the tug a hands-on learned skill that is not for the faint hearted especially when docking with a huge 10 foot by 5 foot barn door rudder. The vessel is powered by a Caterpillar D-348 creating seven hundred twenty-five horsepower turning a single five blade propeller, hence the term single screw. This gives a cruising speed of 9 knots with a range of 3,750 miles which equates to burning 1.6 gallons per mile. The boat holds 6,000 gallons of fuel which helps that Gary owns a fuel dock when it is time to fuel up, and the boat holds 800 gallons of fresh water aboard.

The boats can easily sleep over ten people and not to mention the huge working deck area that big enough to accommodate a Boy Scout troop’s campout with tents centered around bait tank that is mounted amidships. This is probably the only tugboat in Newport Harbor that on the open working deck is a 110 gallon bait tank that holds approximately 10 scoops of boat, so he is ready to slow the tug down slightly from its cruising speed to a trolling speed for yellow fin tuna or other fish in the sea.

Only with a troop onboard, the single head and shower might have a line at the door, and Gary replied, “this is what we call camping togetherness.” The tug is not without interior sleeping arrangements with three staterooms with original deck planking on the floors and two of the rooms has doubles. Yet, boats are not without creative sleeping areas as the wheelhouse can accommodate one for the evening, the outside dinette turns into a double bunk, and the foc’sle will sleep five. The foc’sle, which is slang for the forecastle, is the forward area near the bow of the boat that is usually the crew’s quarters and one of the roughest areas to be in heavily seas.

“Sandi and I sleep on outside dinette bunk until the kids started staying up all hours of the night. Then we changed one of the three double bunk staterooms into an almost queen size bunk with our stateroom lined in bead board,” Gray elaborated to getting a peaceful night’s sleep.

Furthermore, the creature comforts do not include heating or air conditioning, but there is a supply of fresh water produced from onboard water maker. Electricity is provided by a Northern Lights 8 kilowatt generator for AC power along with an unusual 120 volt DC power system.

Hailing Newport Harbor as her home port is a resurrected working tugboat that now cruises the waterways not towing a barge but the decks are filled with family and friends, and only to think that this tug almost met her fate that one day on the Columbia River. So, when you see the William B plowing its way up the harbor with Gary in the wheelhouse then you know this is the real deal as you watch an authentic 1943 tugboat pass by with a skipper who is skillful enough to handle docking this iconic vessel using only a single screw propeller and a huge barn door rudder.

Berths 3 staterooms, foc’sle, wheelhouse, and dinette that sleeps over 13 people

Television None & per owner never will be one onboard 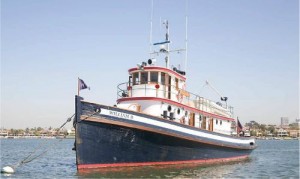