International Remotes? If Not Now, When?

Fourteen years ago I did my first international remote broadcast for KFI AM 640 Los Angeles. My late husband Andrew (also my co-host) and I had been invited to Ireland to broadcast for St. Patrick’s Day 2000.

Once it got cleared, it was a big to-do. Engineer and producer extraordinaire Emeliano Limon was to come with is, and he had an arsenal of equipment. Metal crates and boxes, too much for one person to manage, all got on board Aer Lingus that year as the Karel & Andrew show went live in Dublin.

ISDN lines had to be dropped at each hotel. There had to be access to POTS lines as well. The internet and computers were in their infancy so international speeds were spotty at best. To do the broadcast too an ISDN Codec like the Telos Zephyr, an ISDN line, two microphones, mixing board, vocal processor; it took large audio files taking hours to send and audio recorders like a DAT or MiniDV for field audio that then had to be converted and edited.

In other words, it took manpower, equipment and time to do a remote abroad, or, anywhere for that matter.

I began an annual journey that year, to Ireland, to broadcast. There are so many stories there, so many ways to make it relatable to any audience, including an American one. It is a gorgeous country of very liberal-minded people wrapped in religion and going through evolution yet again. It has all the problems and struggles as a nation and a people that we do here in the USA and a host can find lots to talk about and many to talk to on the Emerald Isle.

But the same holds true for any remote if done well.

I just returned from the annual trip, March 10 through the 18th and what an evolution in the requirements to broadcast.

I took my tool of choice, the Comrex Access Portable. I broke down and bought one after the trial loan that I had and ditched my ISDN completely. I now do radio seven days a week, including KGO San Francisco, from my studios at Park Howard in Long Beach, CA or any place there’s internet with an ethernet plug or even reliable WiFi. 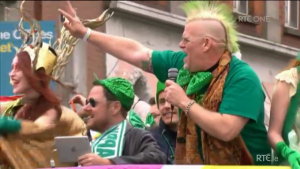 My location microphone (I use a Sennheiser Evolution e945 hand-held wired) plugs in to the back of the Comrex Acces Portable, as does a computer or any other stereo mini-plug capable device for other audio input. I plug my MacBook Pro 13” Retina in to that to play audio.

I record all my audio and video on an iPad or iPad Mini Retina using a USB external microphone plugged in to the iPad. Blue Microphone’s en Core series work well. You can record right in to Griffin’s iTalk or iRecord for audio only or in to iMovie or the camera app itself for audio and video.

When I do field audio I always take video now, why not? It’s more content for your website and Apps. My Karel Cast App developed by myself and Conduit Mobile gets the audio and video almost as it happens.

I transfer the video to the MacBook Pro and use Quicktime to export an .m4a file. An even easier way is to drag the movie file to the Sound Studio (a must have App for editing in the field, far better than GarageBand for Radio. You can even use the stereo tracks as two separate tracks for mixing). Sound Studio will open the audio portion only since it doesn’t do video. A quick “Save As” and a rename and you’ve got the audio file for editing, compressing, adding tags or intros or whatever needs doing.

Karel and Lord Mayor of Dublin Oisin Quinn. Yup, recording on the iPhone, it was all that was available and worked fine.

When it comes time to connect, the Comrex has done so for me from hotel rooms in Dublin, Bed and Breakfasts in the West of Ireland where there are more sheep than people using WiFi of the hotel Pub, from a MiFi mobile hot spot in a car…just about any place I’ve asked it to. With the mike plugged in the back, and then the computer or iPad as well, it’s an entire studio with three portable devices (a laptop, the Access portable and a tablet). 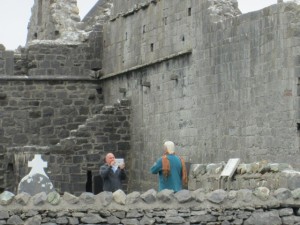 Recording live in Murrisk, outside of Westport, County Mayo, Ireland. Using the iPad Mini to record audio and video for broadcast.

The technology has to be fast and portable for a remote to be a success. My producer works with the tourism bureaus wherever we go, as well as local radio stations (Newstalk.ie in Ireland and their main presenter George Hook opened their doors and resources). I start listening to local media at least a week prior to leaving for the remote if I can, to get a sense of what is going on. I stream the content using the Sonos WiFi devices at home, for any station in the world.

So, for instance, Guinness at St. James Gate, Dublin, the 60 acre place where all of our Guinness in America is brewed, opened their Gravity Bar high atop one of the tallest buildings in Dublin so we could do a sunrise show for my Saturday KGO Audience. That meant going live at 0400 Sunday Dublin time for a 2100 Saturday show here. They were opening the entire place just for us and our show.

We arrived at 0315. I plugged the Access in to the ethernet provided by Guinness. The connection with KGO was instant, having pre-programmed the IP information in the Access. By 0330 I had the microphone, computer and iPads up, broadcasting a live video show through the website using Ustream as well as the audio to KGO. Thousands listened and watched the sun rise over St. James Gate Dublin as we broadcast the video from the iPad mini and the rest of the show over the Access with pre-taped interviews coming out of the MacBook Pro. We had live chat rooms, audio, video in the App, at KGO’s website, Ustream and beyond.

And all the equipment needed fit in a backpack.

On St. Patrick’s Day we were live in the parade, uploading live audio and video thanks to WiFi on the Bus. the Comrex Access was connected via WiFi and I was doing live news shots for the states directly from the St. Patrick’s Day Parade route in Dublin with just he Access and a microphone. Connected 6000 miles away and sounding like I’m right there.

Tourism Ireland arranged a trip to the West and we rode motorcycles around the Wild Atlantic Way. We would stop and use the iPad mini with the Blue microphone to record video and audio, edit it in the car or at the hotel, and I would do lead ins and exits in Sound Studio, combine the files, and upload them via FTP to Genesis (GCN) for air that day. Several times we went live from the hotel rooms again using the Access, a laptop and iPad.

Great interviews await on every remote and you should work early on setting those up. Again, tourist bureaus and other stations can assist. This trip I interviewed the Lord Mayor of Dublin at his home, Mansion House. Last year it was tea and a chat with Irish President Michael Higgins. I’ve been out doing one thing when another interview or story just happens and you have to be ready to record and/or go live should you happen upon something spectacular: and you will no matter where you are.

My best shows are when I’m out of the studio, live, doing something, talking to people, experiencing, bringing that to the audience. Today, it’s easier than ever. Budget wise, we raised the money through specific trip sponsors that take out ad campaigns designed around the remote. Also, again toursim bureaus and other entities often have budgets stil to bring in press for various events.

Go. Find ways to make it fun and relevant.

Here’s a sample from the HuffingtonPost of the audio and video from the trip. There’s also the daily shows in the Karel Cast app and at KGO’s podcast page.

To hear the shows go to http://www.thekdw.com