San Francisco is a hot destination!  Voted countless times as one of the world’s most desirable destinations, the city is constantly buzzing with a multicultural energy of eager shoppers, diners, water enthusiasts, cyclists, sight-seers, or just relaxed vacationers people-watching and going on scenic drives.  Few get to, and even less consider staying at, the small town sitting picturesque across the sparkling harbor, Sausalito.  But Cavallo Point, The Lodge at Golden Gate is gradually, but surely changing that!

Nestled in a glorious nook right under the north end of the Golden Gate Bridge, Cavallo Point Lodge is like a little oasis of calm within a walk of the glorious red bridge and a short drive to the city.

Formally a military base dating back to 1901, the property has been magnificently restored, incorporating historic rooms that were formerly officers’ residences and contemporary suites with panoramic views of the bay and bridge.  The property also boasts the very popular Murray Circle Restaurant, Farley Bar, a cooking school, healing arts centre and a luxuriously rejuvenating spa with a serene wading pool.

A perfect getaway for a romantic weekend, family vacation (steps from the Discovery Museum), sports enthusiasts wanting to run or ride the bridge or hike the trails or just a quick pampered getaway from the city life!

We meet Head Concierge, Nancy DuBois, for some insider tips on visiting Sausalito! 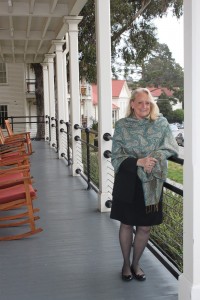 How long have you been a concierge?

Twenty one years total, four of those at Cavallo Point Lodge.

Ginger Rogers was a guest I will never forget, especially as I had been a dancer as well.  She took the time to tell me her life story, and greeted me like I was an old friend.  It was truly memorable!

At a previous hotel I was asked to organize the shipping of a deceased body back to Russia.

“Could you please turn off the fog horn,” from a late night demanding caller!  Ummmm…

There is a bench on the cliff at Muir Beach at sunset – pure bliss! 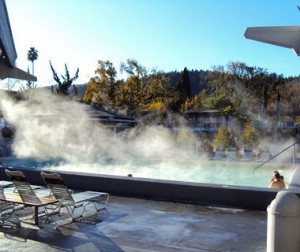 Something people don’t know about the Sausalito?

The word “Sausalito” translates to “Little Willow Grove” as it was originally covered in willow trees.  It was also once a WWII shipyard.

Hiking Mt Tamalpias – the views are stunning over the bay and the city.

I’m sorry but I have to say, go into the city and get something from Cartier!  The city is very easy access!  But locally, it would have to be unlimited sushi and sashimi at Sushi Ran! 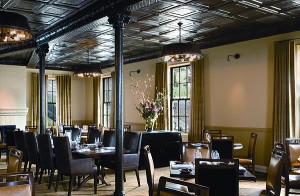 I was in a wheelchair on a trip to New York with my brother.  He had loaded me up with the bags, then accidentally let go, and I went careering right into Dan King!  Not the way I would have hoped to meet him..

Something no one knows about being a concierge.

“No” is not in our vocabulary (or shouldn’t be). We have a very strict code of ethics and really have to wear many hats!

When you travel, what (aside from underwear) do you never leave home without?

If you only have one day in Sausalito, you must…

Do the Historian guided tour around the Italianate Mansions and houseboats, Buckeye Roadhouse for lunch, kayaking, cocktails and oyster on the Cavallo Point porch under the bridge at sunset and dinner at Poggio.

By the fountain where the ferries come in to Sausalito on a Saturday afternoon.  You get such an interesting mix of tourists!

What are your favorite travel apps and websites? 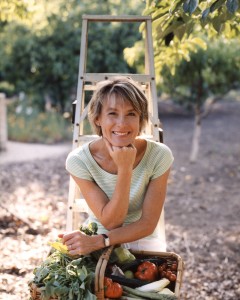 Sally James is an award-winning Australian chef, author, educator, television presenter and an ambassador for Australian food & wine whose books and recipes have won international acclaim for food & wine pairing, health and creativity. Sally is the author of eighteen books, including her best-selling Simply Healthy—winner of the prestigious World Cookbook Awards, Versailles, France, 1999 for Best Health Cookbook, Fresh and Healthy–Winner of the 2001 IACP International Cookbook Award in the Health category, Simply Sensational, a finalist for the IACP Award in 2003, and the Australian Heart Foundation Cookbook.

She has been a guest chef and lecturer for the American Heart Association, the Culinary Institute of America, Epcot International Food & Wine Festival, COPIA, Draegar’s and Publix Markets, the American Institute of Food and Wine, and Johnson & Wales Universities across the United States.  James continues to do guest appearances on television and radio in the US and Canada, including a recurring guest spot on ABC television’s popular View from the Bay in San Francisco.