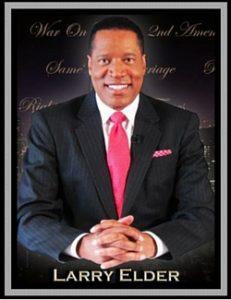 Larry Elder, the recipient of a star on the Hollywood Walk of Fame, has hosted the longest-running afternoon drive time radio show in Los Angeles, beginning in March, 1994. Known to his listeners as the “Sage From South Central,” Larry sizzles on the airwaves with his thoughtful insight on the day’s most provocative issues, to the delight, consternation, and entertainment of his listeners. The “Sage” engages political and cultural leaders in meaningful debates over race, government, personal responsibility and education that have elevated the talk radio genre. A blend of fiscal conservative and social liberal—with attitude—Elder’s limited government/personal responsibility views have fueled controversy and made him one of the most in-demand radio personalities cable news pundits in the country.