Live in Las Vegas with Mike and Ness

Join Michael Libonatti and Vanessa LeGrand for their thrilling NEW show “Live in Las Vegas with Mike and Ness” Immerse yourself in the world of showbiz entertainment! each week Mike and Ness give you the inside scoop on everything Las Vegas from shows to events and all around fun! 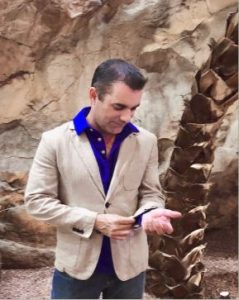 Hi, my name is Michael Libonati with Vanessa Le Grand, for those of you who don’t already know me I am an Entertainment Director in one of the most exciting cities in the country, LAS VEGAS! My Last 24 years of being in entertainment,  I have had some pretty amazing experiences.  I have worked with some of the top names in showbiz and learned a lot of valuable lessons along the way of what it means to be in ENTERTAINMENT, So come enjoy this amazing radio show.

Vanessa is a classically trained singer that has had the opportunity to be part of the Augusta Children’s Choir, the Pittsburgh Children’s Choir, and has had vocal training at The Peabody Institute of Johns Hopkins. During her time with the Pittsburgh Children’s Choir, she was blessed in getting to work with the Pittsburgh Symphony and sing under the direction of Marvin Hamlisch.  After taking a break from music for almost 8 years, Vanessa renewed her passion and started singing in the Charlotte area. Vanessa took the Charlotte music scene by storm playing in acoustic duos and bands all over town. Having conquered Charlotte, she set her sights on Las Vegas hoping to get the opportunity to work with seasoned and professional musicians. After landing in Vegas, she immediately scored a gig as the female vocalist in a Jazz quintet performing at the Palazzo hotel.  Since her first gig at the Palazzo Vanessa has performed all over the Las Vegas Strip singing all genres from pop to jazz, to country and rock. She has performed on Freemont Street, Toby Keith’s, South Point Hotel & Casino, among many others in and out of Las Vegas.  Currently, Vanessa has a residency at  M Resort, NYNY Hotel Casino, Bootlegger Bistro, and NFR, PBR special events.
She is currently working on her first original album consisting of country/rock music and hopes to have an EP by the end of 2019

Keep up with Mike and Ness: