The other day, reading through the always entertaining British rag called, “The Sun”, I came upon a description of a new pizza just introduced at a London pizza chain called Eco. 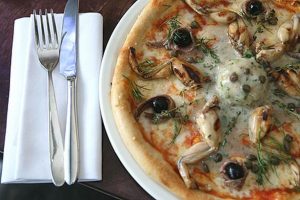 For about $35, you get a pie topped with eight frogs’ legs, capers and an anchovy sorbet.

The inventor, Chef Sami Wasif, came up with the idea while on a trip to Paris.

“I’ve been making pizza for more than 20 years, and I know that London is a city always looking for something new.

Pizza is something you can experiment with.

I might try one with snails on it next.”

Now, frogs’ leg pizza may be a bit outré. But in the world of strange pizza toppings, it barely registers. 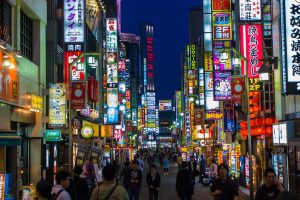 (Actually, there used to be a pizza place in Los Angeles that offered a pie topped with French fries.

And then, there’s the Mega Pizza available at the Pizza Hut chain in Japan – a pie topped with pretty much everything.

It goes for an almost reasonable-sounding $30.

But then, when it comes to eccentric pizza, there may be nothing to compare with Tom Seefurth’s Mamma Mia Pizza Beer – beer flavored with oregano, basil, tomato sauce and garlic. Interestingly, it’s a low alcohol beer. 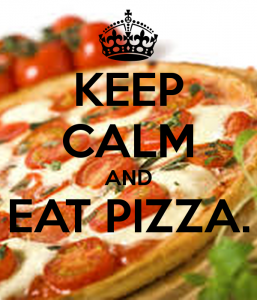 And there’s no getting around its sheer…efficiency.

Pizza and beer, all in one handy vessel. If there was a pepperoni option, it would be perfect.

And even when imperfect, we definitely love our pizza here in America.

The pun about it being a lot of dough is an obvious one.

But there’s no denying that $25 billion worth of pizza a year makes pizza the Big Cheese among American fast foods.

The $25 billion of pizza that we consume every year is the equivalent of 90 acres of pizza every day, which is a lot of crust no matter how you slice it.

And it is, by far, our favorite fast-food; a recent Gallup Poll revealed that kids would rather eat pizza for lunch and dinner than any other food. And that includes such American classics as hamburgers and hot dogs.

This is especially impressive when you consider that pizza is such a new dish on the American menu.

And pizza didn’t really take off as an American phenomenon until after World War Two, when GIs returning from the south of Italy came home with a craving for dough with spicy tomato sauce and cheese slathered all over it.

It even then it took quite a while for pizza to catch on, with the first Golden Age of Pizza beginning in the mid-Fifties, just in time to coincide with Elvis, Davy Crockett and the hula hoop.

These days, the average American eats pizza 30 times a year, which adds up to 8.6 pizzas per American per year. 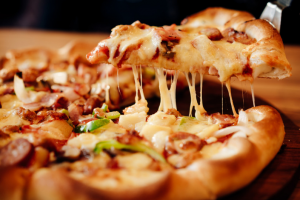 Not surprisingly, pepperoni is the topping of choice.

Somewhat surprisingly is the abundance of regional toppings that travel little at all beyond their home base — goat cheese and sundried tomato pizzas in Southern California, taco pizzas in the Southwest, sauerkraut and sausage pizzas in the Midwest.

And then, there’s the pizza of legend, the pie that most speak of as the sine qua non of the breed.

It’s called the New York-style pizza, and no one is very good at defining it, including those who live in New York.

As a rule, it’s got a thin crisp crust, topped with lots of sauce and lots of cheese, with a distinctly burnt bottom.

Definitive New York pizzas are to be found in the Big Apple at John’s and Original Ray’s in Greenwich Village, and Vinnie’s on the Upper West Side. And where do you find pizzas of legend here in Long Beach. 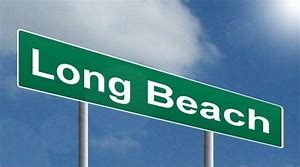 The choices are many, and in this case, highly subjective.

But when the need is upon me, this is where I go.

And the need comes upon me often — at least 30 times a year, if not more than that.

Named for a reference in the New Testament to the number of followers fed by Jesus, and

“a social enterprise of Fountain of Life Covenant Church.” Our mission is to Transform the lives of young adults in West Long Beach through culinary employment and life skills coaching.”

This isn’t just good pizza — it’s pizza that’s a blessing to many.

The pies are classic, and to the point, topped variously with pepperoni, sausage, pepperoncini and feta, and with ham, Spam and pineapple.

They come both thin crust and deep dish, though do take note the deep dish takes about an hour to cook — this is not pizza that wants to be rushed.

If 5000 ever showed up, it would take a miracle to make pizzas for all of them. Or, perhaps, a savior.

Maybe, maybe not. But it is, simply speaking, a great pizza.

You can enjoy it, with an opinion or without.

And with prosciutto and guanciale and Calabrese salami or without. For this is not doctrinaire pizza, following the dictates of the Pizza Police of Naples, who have declared that any pie other than the original Margherita (mozzarella, tomato sauce, basil — the red, white and green of the Italian flag) is a bogus parvenu.

They also restrict the size of the pizza.

They’d be outraged to find that Michael’s offers a gluten-free pizza.

And horrified by his pies with artichoke and goat cheese, with shrimp and clams, with chicken and red onions.

And lest I seem to be avoiding the issue, let me go on record to say this really is one of best pizzas I’ve ever had.

I love the superb crust, with a memorable crunch, burnt just a little as it emerges from the blazing woodfire of the double ovens.

The crust stands high around the edge, a levee of sorts, holding in the mushrooms and olives and puddles of cheese — and even in the case of the carbonara, a pair of organic eggs, which spread the goodness of their yolks all over the surface. 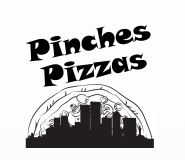 pizzas, and both with the occasional Mexican dish thrown in just to keep things interesting.

And so, in the midst of the many Italian creations, there’s a Mexican pizza called a Mexican Bandido, topped with pepperoni, jalapeno, onions, chorizo, beans and tomato.

There’s a Senor Alfredo too, made with chicken, bacon, onions and Alfredo sauce, which strikes me as a bit much, but then I’m kind of a boring purist.

Sort of, And just to squeeze in one more ethnic option, there’s a Vietnamese Sriracha Banh Mi pizza, with Sriracha chicken, jalapenos, carrots and cilantro.

The pies all come in five sizes, from small to monster, which is in a box so large, you may need a station wagon to get it home.

There’s a Hawaiian pizza too, made with pineapple, but no Spam.

But only kind of. I like it more than pineapple, which leaves me befuddled.

Pizza for brunch Pizzanista! (1837 E. 7th St., Long Beach, 562-591-6929, Consider, for a moment, the curious pleasure of the Rise & Shine Pizza, served by the slice (which is probably more than enough), and by the pie (which is great for a very hungry group of heavy forks, and crazy for a single who’ll be eating leftovers for a week). 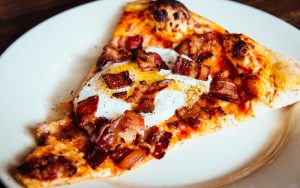 It’s a thick pie, something a bit more than a New York thin crust, but not quite a Chicago thick crust.

It sits, as do most of the pies, on a horizontal set of racks, which you can examine through a glass front, marked with names.

On top of the crust, there’s tomato sauce, lots of mozzarella, lots of parmesan-esque grana padana, a rasher of bacon and eggs, ostensibly cooked over easy, but really cooked till they’re pretty well done.

There’s black pepper scattered on top. Lifting the pie, just a slice, can be intimidating.

I’m reminded of the old rule to never eat anything larger than your head.

And if my head was triangular (it’s not), this would probably extend out past the edges.

It’s a heavy pie, substantial, a meal eaten at a time of day when pizza is not necessarily the default dish of choice.

But then, why not? What we have here is bread, cheese and bacon, a perfectly rational option for brunch — or frankly any meal.

At Pizzanista! they happily break the rules, tear apart the norms.

And feed us good in the process.

There are six pizzas listed under Brunch, though from what I can tell, most of the other 20 varieties are served as well, including a smattering of vegan pies, made with vegan cheese, vegan sausage, vegan pepperoni, vegan bacon and a tofu scramble.

If that’s what you need, there you are. There’s a protein heavy pie called “Meat Jesus” (pepperoni, sausage and bacon), which is done in a vegan version called

This is playing with words, and playing with pizza at the same time. Someone here is having a lot of fun with food.

The lure of Chicago-style pizza is always with us, with foodies returning from Chicago with tales of the wonders of Chicago deep dish — which isn’t so much a pie as it is a casserole on a crust.
And so, we dutifully head for Rance’s Chicago Pizza (5258 E. 2nd St., Long Beach, 562-786-5566, www.rancespizza.com), with branches in Belmont Shore and down the coast a spell in Costa Mesa, to see if the Chicago style can complete with our New York based, thin-crust pies.

Something Rance’s manages — by offering a choice of three different styles.

It’s a good place to go with a bunch of people, for the menu works well for those who can’t quite make up their minds, and feel the need to order a lot of stuff.

That way, you don’t have to decide between the garlic cheese sticks with marinara sauce, and the cheese and artichoke dip; between the pork meatballs with melted provolone cheese, and the bruschetta topped with feta and garlic pesto.

And between the several different styles of pizza.

But then, it works well for a party of one as well — with an eight inch thin crust appetizer pizza, and salads that serve a single, if you order the half.

The Thin Crust Model is the one we’re best acquainted with, a bit thicker than thin “thin” crust — this isn’t the cracker crust pizza of Italy.

Then, there’s the Pan Pizza, which comes close to the Chicago style of deep dish, with caramelized cheese around the edges of the thickish crust that gives this pie a flavor that’s really good.

Not as quirky as those chain models with cheese actually in the crust, which go way over the top.

But enough cheese to make the Pan Pie tasty fun — and to fill you up fast. This is pizza you’ll take home.

Depending on what ingredients you choose, this can be one considerable architectural construct — a pizza that threatens to collapse upon itself, but never does.

Is Rance’s a true taste of Chicago. Hard to say.

But it is a good taste of Belmont Shore — and very tasty that is.

Close enough to Long Beach Airport that, if your flight was sufficiently delayed, you could probably dash up to Village Road Pizzeria (4123 Norse Way, Long Beach, 562-420-0040) for a slice, a pie, or maybe a to-go order of pasta, to sustain you rather than the wet cardboard served as meat in airplane meals.

The pies in this case, are absolutely classic — thin crust, with a good char, lots of cheese, and a finite world of classic toppings.

On a long flight, a proper pepperoni and mushroom creation would probably sustain me. Though I have no idea if the TSA permits takeout pizzas on flights. I can’t think of a reason they’d restrict it. But then, you never know. 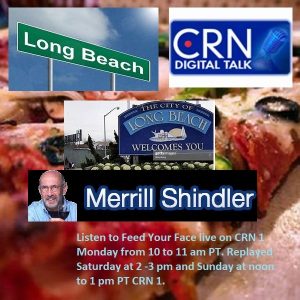