He is just celebrating his seventh year as the host of his novel radio show, “Hear Them Again – For the First Time!” on CRN Digital Talk Radio 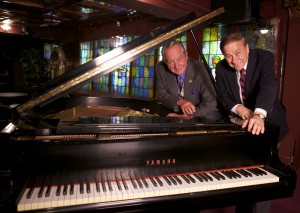 Every weekend, Larsen plays rare vintage records from his incredible collection of recordings by show business personalities of the past.  He says the records are so old they are brand new to younger audiences of today.  The rare records range from silent star Rudolph Valentino singing to comedy novelty songs.

Over the years a segment of the show every week has featured famed Academy award winning songwriter Richard M. Sherman (Mary Poppins, Chitty Chitty Bang Bang, etc) talking about the often forgotten popular songwriters of Tin Pan Alley. This feature has become so popular that Sherman and Larsen will now present a new one hour CRN show “Hit Parade Cavalcade” Saturday evenings at 8 pm (Pacific) on CRN-3 immediately following “Hear Them Again for the First Time.”

Each show will salute four composers and lyricists who wrote America’s favorite hit songs of the past.  Both shows offer unusual fun musical entertainment that you won’t hear on any other radio stations.