National Tour for “Once” : The Dreamer, The Muse, the Music

Dreams are fragile, living things; neglect them and they die, devote yourself to them and they exhaust and frustrate. Achieve them and they can bring great joy, but there is always, always a price.

.
When the dream involves the arts, when the passion inside burns to make music, to sing, dance, write, paint, sculpt—to create—the road is especially perilous, the dream nearly impossible to obtain and when one does, never, ever is it what they imagined. I speak as both a working artist and someone who has spoken to every major working musician or artist over the past 30 years; a life in the arts can be the most rewarding and also an emotional and professional roller coaster ride.

That’s why so many give up. The dream just seems too big, the odds too long, the payoff too risky. At 20 I thought being successful meant hit records, movies, gallery sales or 200 radio stations. At 50 I know in the business of entertainment if you’re working, able to survive and have some quality of life with no other “day jobs” you are a success.

And artists cannot thrive without a muse of some kind, inspiration and they cannot flourish without support, an anchor. Just as Frida had her Diego, artists that find that supportive voice when they need it most are often the ones to go on.

The musical Once at the Pantages Theatre in Hollywood (now through August 10th then continuing its mulit-state tour examines those themes in a musical stage production that is small compared to today’s standards and tours. There’s not an enormous cast in front of 30 musicians in the pit, there’s no real special effects, in fact, there’s only one set. The dialogue isn’t filler for the songs, it’s, well, separate. Once is more a pub concert mixed with a behind-the-music episode.

It works small because it tells a small story. You see everyone has dreams, everyone wants to be more, to achieve. And many give up those dreams for what is perceived as “reality;” get a recognized job, settle down, live a life, retire. It’s universal. And in the arts, it’s older than Shakespeare. It’s a story that plays out every single day in Los Angeles or New York, Dublin, London, Mumbai, Cape Town, dreams fall by the wayside every day, many without so much as a  whimper. 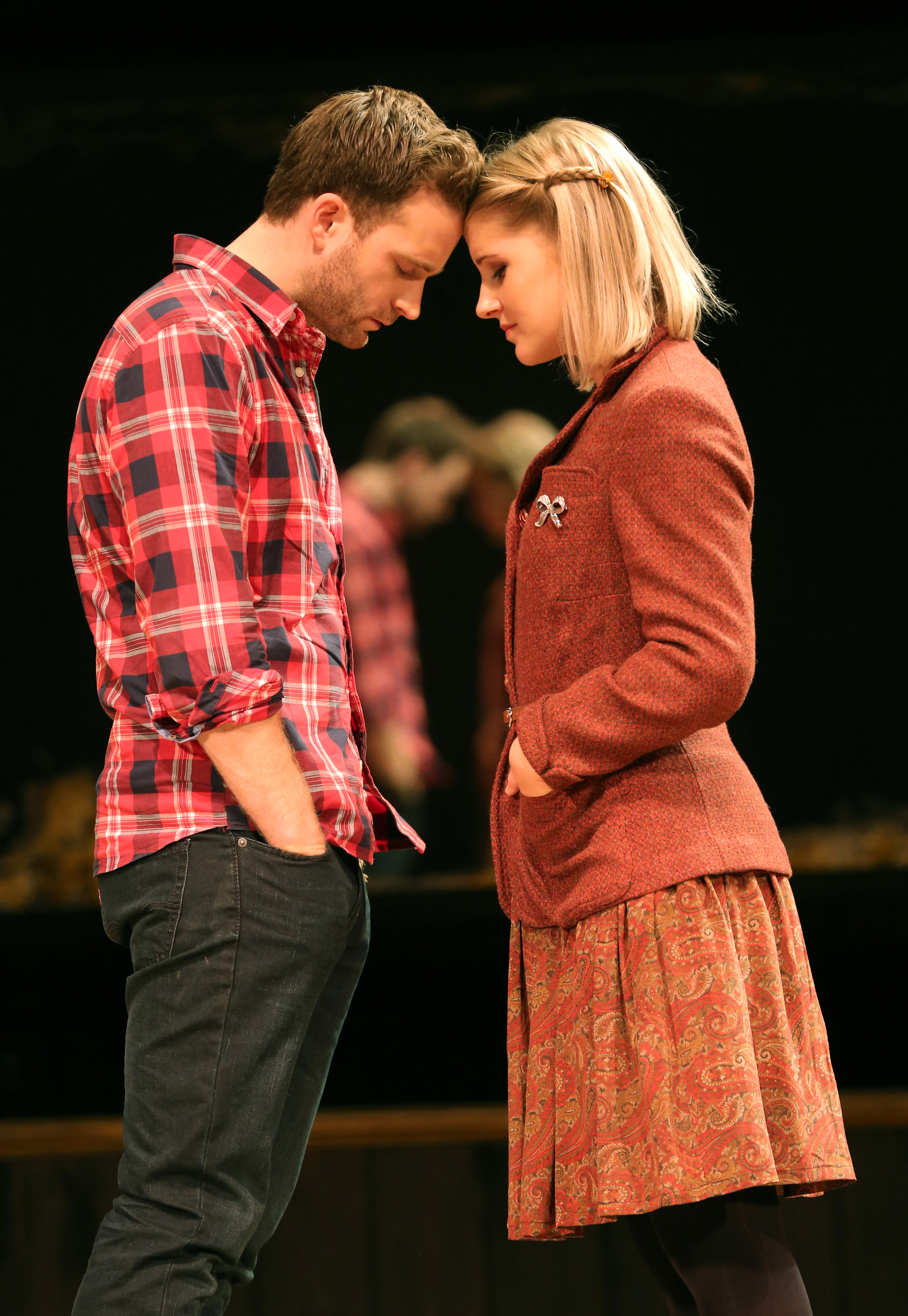 But dreamers oftener meet someone that kick starts their passion. They find someone that believes in them so much that they would compromise their own dreams for theirs. Sometimes, it’s a perfect stranger.

Guy literally meets Girl in this play, as that’s how we know them, in a pub. The pub where the entertainment begins before the play. Audience members are brought on stage, to have a pint and listen to Dublin pub music. I’ve heard it for years in Dublin, and this was the same spirit, the same verve. I recalled the broom dance we had performed for us in Portmagee, Ireland, by a 12 year old girl followed by singing, dancing, all by locals, all fabulous. The play’s opening brought those memories back, meaning they truly capture the spirit of a pub (Public House, FYI).

Guy is abandoning his guitar, his dreams, his hopes of a career. There’s even a girl that’s left Dublin for New York, one that he still pines over and writes songs about. Adele’s bad breakup gave us the multi-platinum 21 album so breakups are great for songwriters. Girl walks in just as Guy is finishing his last song in public. She asks for more. He says no. Of course, she gets her way and passionate ballads and rousing celtic-sounding music springs forth from Guy and the other cast members. The pub changes with lighting for other scenes but the cast members all play and form the orchestra on the side of stage. This keeps the concert feel, the intimate pub feel, the behind-the-scenes approach.

I loved the Irish setting, as I love the country and people of Ireland. Irish playwright & screenwriter Enda Walsh did the book for the play, music and lyrics by Glen Hansard and Marketa Irglova  (who starred in the film) and the hit Falling Slowly will be familiar even to those who have never seen the movie or play. The handsome Stuart Ward as Guy and Dani DeWaal as Girl anchor the play and John Tiffany’s director keeps the numbers tight and the play moving swiftly, given it’s two-plus our length. The ensemble is rock solid, each carving out a little niche for their dream, their passion along the way.

Perhaps Once will remind Broadway producers that you don’t have to spend $400 million on a production to bring in audiences and win acclaim. Maybe they’ll remember that great singers and actors, a good book/story, engaging music and universal themes that resonate deeply with audience members is what good theatre, even and especially musical theatre, is all about in the first place.

The play is based on the Academy Award-winning film of the same name. It has won eight Tony Awards and the Cast Album won the 2013 Grammy for Best Cast Recording. It’s innovation is in its simplicity; its appeal the universal themes of inspiration, of love, longing, the complexity of the human condition when dreams and passions are involved.

To hear Karel get the Karel Cast App, subscribe in iTunes to the Podcast or simply go to the most incredible website on all the planet, save this one, iamkarel.com