The Magic of Radio 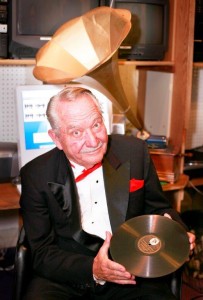 When I was a kid I always loved radio. As a teenager, a friend of mine and I hosted a show for KSVA a closed circuit broadcast to the beds at Sawtelle Veterans Hospital. As an avid collector of vintage records, CBS Radio host Jim Hawthorne paired me with the founder of CBS radio Andrew White to talk about the old days of radio. The CRN show I host now originated on a small station KZBN owned by Bob Newhart in Santa Barbara.

After Bob sold the station to the Santa Barbara News Press its format changed to all-news. I moved to KKZZ in Ventura and then Mike Horn offered me the chance to join the family at CRN Digital Talk Radio.

Radio is catnip to me. I have been a successful comedy writer, songwriter and TV and stage producer. I am probably best known as the founder of the now world famous Magic Castle, the magician’s club in Hollywood. The Castle just celebrated its 50th Anniversary of the opening in 1963.

If you think about it, radio is magic! Radio excites the mind with images in the brain. Who needed television when Orson Welles panicked the nation with his broadcast of the Martian’s invading the earth? We “watched” Fibber McGee open that closet door and drew our own pictures of a soundman creating the myriad of effects. On my Hear Them Again show I bring back to life the comics and vaudeville singers and dancers of the past. It’s all just a magic illusion. Through the magic of radio our young listeners and try to understand the world their parents and grandparents lived in when cell phones were something they let prisoners use in prisons. Refrigerators were “Ice Boxes” and you could buy a soda at the local drug store. On my shows Professor Harry Hockmann, the world’s oldest vaudevillian, brings up one recording from the vault that was made in the days of acoustical records pre-1925. Amazing machines – wireless music players. All you had to do was wind up that old gramophone. To listeners of the time it was all magic!!

A couple of weeks ago I played an old 78 of the great comedian W.C. Fields talking about the day he drank a glass of water. His line says it all: “Ahh, those were the days —- I hope they never come again!

“Hear Them Again (for the first time)” might be described as a one-hour comedy musical crazy quilt of recordings made in the days of the old 78-rpm shellacs – great show-business performers of the past plus the wacky novelty songs of the twenties and thirties. He also hosts another one-hour show Hit Parade Cavalcade with Academy Award songwriter Richard M. Sherman (Mary Poppins – Chitty Chitty Bang Bang). They talk about the little known composers and lyricists of Tin Pan Alley)