The Wine Exchange by Allen R. Balik: Spotlight on Burgundy

The Terlato Wine Group has a long history under the Terlato family’s leadership of bringing excellent wines to the U.S. market from around the world and principally, France and Italy. Through the generations, their most discerning palates and keen awareness of our market have created the foundation of quality and regional character they strive to achieve for each wine in their remarkable portfolio. 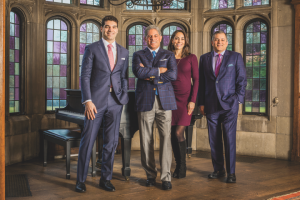 In addition to importing and distributing their many treasures from the Old World, the Terlatos also produce several wines in California’s most prestigious growing areas including Napa Valley, Sonoma, and the Central Coast. Among others from Napa Valley, you will recognize Chimney Rock in the Stags Leap District and Rutherford Hill in Rutherford. You should also be aware of the limited production Napa releases of Terlato Vineyards that are hand-crafted in a unique “winery within a winery” at Rutherford Hill.

Earlier this month in San Francisco, John Terlato hosted a tightly focused tasting of five of their Burgundian labels with the winemakers and principles pouring exclusively for the trade and press. Demonstrating Burgundy’s diversity, the tasting featured 26 carefully chosen wines, including a few Regional and Villages selections, a rich representation of Premier (1er) Crus and several well-chosen Grand Crus (just 2 percent of Burgundy’s planted acreage). Both whites and reds were included from the highly acclaimed 2015 and 2016 vintages.

2015 was a warmer than normal vintage (some rain at harvest cooled things down) producing wines of greater opulence and weight with no indication of over-ripeness. 2016 began with cooler temperatures that morphed into a devastating spring frost destroying about 50 percent of crop overall and far more in some cases. As summer approached the climatic conditions returned to a more normal pattern and the wines displayed elegance and precision overall.

In the Old World tradition, I chose to taste through all the reds from Regional and Villages selections through 1er Cru and Grand Cru before embarking on my exploration of the whites in that same order. Red before white may differ from the normal order of service at the dinner table but is a well-thought-out tasting regimen. The higher acidity of the whites, if tasted first, can enhance the tannins of the reds that follow, often providing a stilted impression of the wines. So reds are best tasted first, especially with the delicacy of Burgundy.

Throughout the tasting, I found a profound expression of terroir between reds, whites, different appellations and most remarkably from different vineyards within the same appellation by the same producer.

Domaine Michel Niellon’s selection of three 2016 1er Cru Chassagne-Montrachets could be seen as proof of terroir’s existence to even the most ardent opponent. The “Les Champgains” exhibited green apple and spice with intense minerality and acidity. The “Les Vergers” was quite the opposite, displaying a supple richness with notes of pineapple and melon while the “Clos St. Jean” was somewhere in between, expressing with great appeal the spice of the former and melon of the latter.

Domaine Roumier’s selections were a classic example of Burgundy’s classification and appellation identity from the same vintage (2015) and representative of the Domaine’s heritage. The Villages Chambolle-Musigny was elegant but a bit simpler in its expression while the Morey-Saint-Denis 1er Cru “Clos de La Bussière” was a significant step up in complexity. The Chambolle-Musigny 1er Cru “Le Combottes” moved the scales even higher and was the perfect introduction to the two 2015 Grand Crus that followed. Both the Charmes-Chambertin “Aux Mazoyeres” (so enticing, I felt drawn into the glass to experience the wine’s true spirit) and Bonnes-Mares showed great elegance in combination with the power one would expect from Burgundy’s top classification, time-honored vineyards and the skilled hands of Christophe Roumier.

Domaine Pierre Labet provided an enlightening journey through the Regional and Villages wines of Bourgogne, Beaune, Mersault and Gevrey-Chambertin traversing to the 1er Cru of Beaune “Coucherias”. Also presented by Edouard Labet, were two very impressive 2015 Grand Crus of Château de La Latour – Clos Vougeot and Clos-Vougeot “Vieilles-Vignes.” Both were stunning with a nod to the Vieilles-Vignes.

Most would agree that the wines of Burgundy represent not only the world’s finest expression of varietal character in both Chardonnay and Pinot Noir but also how each lives in harmony with its individual terroir, producing wines of elegance, depth, structure and monumental enjoyment.

Looking back on these magnificent wines I also reflected upon my recent tasting at the Union des Grands Crus de Bordeaux, naturally comparing the two areas in my mind. Overall, both represent classic growing regions with a tradition of producing superb wines that demonstrate very different stylistic impressions. Bordeaux may be a towering oak while Burgundy represents a beautiful and delicate flower.