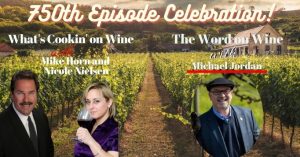 Host Michael Jordan and Michael Horn celebrate What’s Cookin on Wine and The Word on Wine’s 750th episode with a star-studded panel.

“The Word on Wine and What’s Cookin on Wine have become some of the most respected radio shows and podcasts in the world of wine,” says host, Michael Jordan. “Bringing the joy of wine to the public is my passion and it was only fitting to celebrate the legacy of the show with some of the most important people in the industry.”

What’s Cookin’ on Wine began in 2002 and has become the place for the industry to share its bounty with the world, making wine accessible to everyone no matter what their level of appreciation.  In its original form, What’s Cookin’ on Wine was hosted by Michael Jordan, Michael Horn and the famed Robert Lawrence Balzer who was known for being the country’s first serious wine journalist.  It emanated from The Napa Rose Restaurant at Disney’s Grand Californian Resort.  From there the show moved to The Beachcomber in Malibu, The Ranch in Anaheim, Rock Sugar in Century City and traveled all over the world, including broadcasts from the Hawaii Food and Wine Festival, the Kapalua Food and Wine Festival, broadcasts from the Czech Republic, Sonoma, Napa Valley and more!

In the near two decades that followed, What’s Cookin’ on Wine began broadcasting from Ruth’s Chris Steakhouse and is today hosted by Michael Horn and Nicole Nielson.  Michael Jordan spun off What’s Cookin’ on Wine and created The Word on Wine which broadcasts from Hi-Time Wine Cellars in Costa Mesa.  The show also provided inspiration for CRN’s Sonoma Report, Slow Living Radio, The Oregon Wine Report, and more!

Veteran Restaurateur and Five-Time “Sommelier of the Year” Michael Jordan is Director of Global Key Accounts for Jackson Family Fine Wines. Jordan also chairs the Los Angeles International Wine Competition – now 75 years running and the oldest competition in America. Previously Jordan served three years as vice president of food & beverage for Anaheim’s award-winning restaurant and live music venue, THE RANCH Restaurant & Saloon (Zagat 28-29-28). Prior to opening THE RANCH, Jordan was president of The Beachcomber Restaurant Group. Before that, he served as Global Manager of wine sales & standards and wine education for Walt Disney Parks and Resorts® Worldwide – and nine years as general manager of the world-famous Napa Rose restaurant at Disneyland Resort® in Anaheim. In his career, Jordan has been involved with the opening of seventeen restaurants including Pinot Provence in Costa Mesa, and was general manager/sommelier of Pavilion at Four Seasons Hotel Newport Beach when it received AAA’s Five Diamond Award.

Jordan holds a Master Sommelier diploma from the Court of Master Sommeliers as well as a Certified Wine Educator diploma from the Society of Wine Educators and is one of only 15 people in the world to hold both these diplomas. Beloved in the wine industry, Jordan has taught comprehensive wine and beverage courses to thousands of students. He has affectionately become known as The Sommelier for the People.

Michael Horn is an original host of The Word on Wine and What’s Cookin’ on Wine.  He also hosts, the daily syndicated What’s Cookin’ Today show, the nation’s premier food, wine, travel, and entertainment show.  He is well respected in the industry and is a regular judge of the LA International Wine Competition and a Certified Sommelier from the Court of Master Sommeliers

The Word on Wine airs weekly on CRN Digital Talk Radio and many radio markets across the country.  It is streamed and available for podcast worldwide on all major platforms. Ask for What’s Cookin’ on Wine or The Word on Wine on Alexa or Google Home!

View all posts by: Debbie Barrera